How your brain tricks you (when investing) 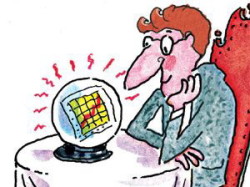 I was having a drink with a couple of friends over the weekend in Shanghai.  You know the type, they are always smarter then you and everyone else.  They knew the financial crisis was coming.  That Ford wouldn’t go broke like GM.  That the US equity market would zoom in 2009 in the middle of the recession.  They knew it all.

I’m not picking on these guys though, for a very good reason.  They are simply human.  They suffer from the behavioral bias towards money we all do.  It’s called Hindsight bias.

“But I don’t suffer from any irrational bias!” I hear you cry.  How many people do you think are rational when it comes to money?  Of course some people are emotional, but surely myself a fact based doctor/engineer/CEO is one of say 20% who are rational?  Actually it is far less.  It turns out that practically no-one is rational on financial decision making.  No-one can remove emotions even if they tried (without brain damage that is).  All decisions in uncertainty are made by the pre-frontal cortex – ie the emotional bit.  Without that, and some poor people have had theirs removed, then we would fail and find it impossible to make a decision.  Don’t think it’s all bad; some parts of the pre-frontal cortex are there for good reason.

My friends seemed to have a full brain (I think) and they had one small weaknesses in the argument.  None had shorted the market prior to the financial crisis.  None had sold-short GM.  None of them had bought the market in early 2009 either.  If they were so sure, then they would have done something, wouldn’t they?  Of course they had reasons they claimed, but they weren’t the true reason.  Their brains had tricked them.  Our brains lie to us about what we know and when we ‘knew’ it.  It’s probably related to cognitive dissonance and overconfidence bias also.

Hindsight bias is one of the key reasons (at least in my opinion) on why people don’t use financial advisers.  They saw the financial crisis coming but most financial advisers didn’t (in their view).  Don’t believe it, it’s just a brain trick.  Unless you are consistently and getting excellent returns year after year in your share account and getting rich, you are just tricking yourself.  Don’t allow any excuses “oh but for those two bad picks I would have done great”.  Be hard on yourself like you are on anyone.

One of the key advantages of using a financial adviser is that it is much easier to be rational and disciplined with someone else’s investment.  All the fear, anxiety, greed and everything is stripped away and only the investment decisions remain.  For one of my clients, I have a success rate of almost 100% on equity selections (only one selection has lost money in the last 5 years and it wasn’t much) and he has made strong gains each year we have worked with very small volatility.  Our partners found our own accounts were more volatile with poorer returns, so we actually manage the each other’s money.  It has produced much better returns with less grey hairs.  So much for the principal-agent problem being the cause of all that is bad in finance.

Of course hindsight bias isn’t the only one.  There are about 20 biases that behavioural finance researchers like Daniel Kahneman have been able to prove and document.  Anchoring bias (sticky house prices), illusion of control (Las Vegas), confirmation bias (Fox news), loss aversion bias (bank interest) etc.

Ultimately the theory shows that each is a result of evolution.  Financial markets are too recent and therefore don’t fit with evolutionary impulses, hence the poor decisions.  The tough aspect of this is my friends at the bar.  Even with the help of hindsight, one or two seem completely untroubled by any noticeable effects of evolution.  At least that’s what the girls sitting at the next table said… more or less.