Way back in 2011 we predicted that the Chinese RMB wouldn’t get past 6 to a USD.  That was a gutsy call at the time since the RMB was 6.48 and consistently appreciating at about 6% per annum from 6.8 not long before. 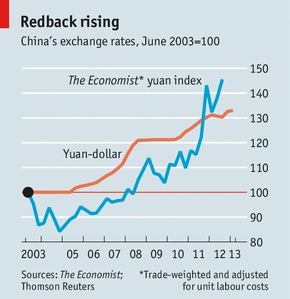 Actually we still argue that an exchange rate of 6 is about the top, so we argue that we are pretty close to peak rate for the RMB. Much of our statements made in 2011 in this report, still stand.  Have a read here.  But 2 years is a long time so some things have changed.  Mostly to support our previous stance.  What has changed?

Well, the RMB has inched up as high as 6.1 to a USD. That’s pretty darn close, although it has sold off in recent weeks. In particular, note the quick-sell off in late June when fears of a banking crisis rose.

Note the spike in late June. 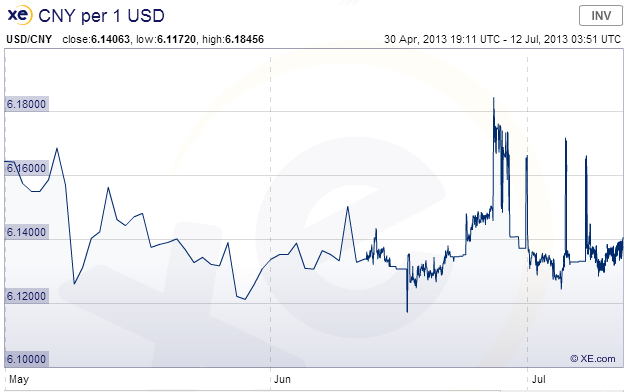 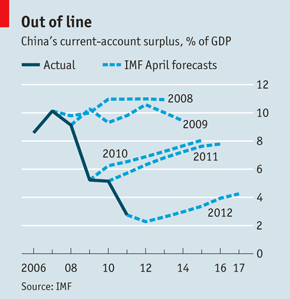 We keep seeing more reports that China is no longer cost competitive with other cheaper locations.  The way to measure this is the trade surplus and in June, it shrank again by 14%.  This leaves it far lower than it was before as this trend line shows.  China is not nearly as competitive as it was.  More evidence – have you heard any US senators complaining about the RMB being undervalued recently?  That’s because it isn’t and this is reflected in the trade balance. 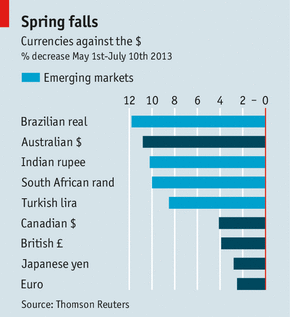 The US dollar in recent times has started to return to strength after being weak over the previous few years.   Just recently it has risen very strongly.  Being pegged (or even appreciating against) a strong currency isn’t exactly China’s idea of a good time.

The Big Mac index, just released by the Economist today (nice timing that) shows that the RMB is possibly still 40% undervalued, except for one small wrinkle.  As the economist says:

The Chinese yuan is 43% undervalued on our basic gauge; adjusted for GDP per person, it is only 4% below fair value.

Why has the government allowed a rise?

Why the persistent myth of a stronger RMB?

We have two theories.

Recency Bias.  The RMB has been going up, so it is likely to continue going up.  It is the same reason the average investor piles into the stock market when it is up 20% and avoids it when it is down 20%.  We are all trend followers at heart, although it isn’t always a wise investment strategy.

The second is I believe the average Joe (or Zhang) on the street mistakes a country’s rise for that of its currency.  China is, indisputably, rising therefore the currency must also.  They tend to ignore inflation rates, trade levels and competitiveness.  These linkages are for economists, forecasters and boring nerds like myself.  The boring nerdy links though are pretty clear.

There is a school of thought that says a stronger RMB is the government’s goal to helps find it’s natural level thus allowing a less volatile departure from RMB controls.  Consider this argument from the Economist magazine this month.  The economist notes,

“Li Keqiang, China’s prime minister, said that an operational plan for easing capital controls would be put forward later this year. If the yuan were much below its market value, relaxing capital controls could invite a destabilising influx of foreign money. By that logic, the government might have seen a stronger yuan as a necessary precondition for looser controls.”

This argument does mesh with the small but steady stream of relaxations around the RMB such as wider trading bands, more currencies offered direct settlement and public statements.  It also supports the strong confidence that we and many finance industry contacts have noticed with Shanghai financial officials, who in private conversations also say opening of the RMB is a matter of time.

If relaxation will continue, will the RMB continue to rise?  It will keep rising if it hasn’t found its natural level.  Of course, if it has found it is true level, we might be looking at a currency near its peak given higher cost inflation in China.

So, it is time to celebrate peak Yuan? What do you think?

Want to learn more?Join our private LinkedIn Group that shares the inside story.


Categorised in: Investing in China, Investments