Why your assumptions are hurting your returns.

Here we delve deeper into Behavioral Finance which we kicked off recently.  Today we are going to look at how your assumptions and mental accounting hurt your investing, caused by a thing called Representativeness Bias

Humans are built to analyze and classify.  To put a label on things.  Labeling, you see, has benefits: it provides a short-cut to making a decision rather than thinking things through.  But when investing, those short-cuts are often, most of the time, way off the mark.  If you fail to double check your assumptions or labels, you are suffering from Representativeness Bias.  Many people, even when asked to stop and consider, aren’t good at looking at the probabilities because their brain and its habits makes assumptions and races away.  This is a cognitive bias, meaning it is often an error in logic, which makes it easier to correct.  I’m going to provide some clear examples and then relate it to situations you can apply for yourself.

Question: Jim is an ex-minor league basketball player. After he graduated from university, Jim became a physical education teacher. Jim has three sons, all of whom are excellent athletes. Which is more likely?

b. Jim coaches a local Little League team and plays with the local men’s basketball team.

Which do you think?

Answer: Many people would pick “b,” which is the predictable answer, are likely to suffer from base-rate neglect representativeness bias. It is possible that Jim both coaches and plays basketball, but it is more likely that he only coaches Junior basketball.  Here is the graph that helps explain. 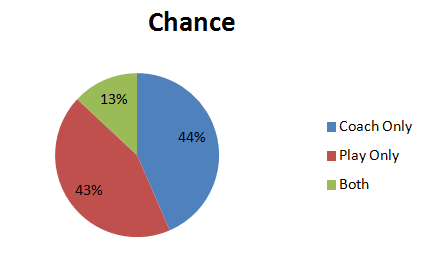 The problem is people jump to the conclusion that “he is a basketball person, so he is more likely to be involved in basketball in every way possible”.  The graph above also illustrates the unspoken choice – Jim only plays basketball.  B refers to the small slice of both coaching and playing.  We made up the numbers, but you can see it must always be the smaller slice since only a portion of junior coaches, also play themselves.

The second is ‘sample size’ neglect.  This often appears when people are considering the market or an individual fund manager’s returns.  But first let’s look at tennis to illustrate our point.

If you are the better tennis player, should you prefer a 3 set match or a 5 set match, assuming that you both equally fit?  Have a think about it.  Most people would be indifferent thinking that they are both equal measures of ability.  But think about it in a smaller scale.  If you are the better player, would you prefer 21 points or 3 points?  Obviously 21 points since any player can hit a couple of lucky shots, or under the pressure you throw in a bad shot and you lose in 3 points.  So the correct answer is 5 sets.  Men’s tennis is more predictable than women’s at Grand Slam tournaments, and it is no accident that Men play 5 sets versus only 3 for Women.

In finance, sample size neglect leads people to consider small amounts of evidence as being significant.  We just don’t have a good feel for it.  It could however be random chance or a fluke.   Is the last 6 months of a fund manager’s outperformance really meaningful?  Not statistically speaking.  Here is what often happens.  Make sure it doesn’t happen to you.

A firm called DALBAR conducted a survey into investor behavior in 2003.  The title was Quantitative Analysis of Investor Behavior. It showed that investors tend to buy funds that had recently showed a rapid price rises. But by buying then, at the top part of the cycle, they found tends to shortly precede a subsequent fall in the fund’s performance. When prices go down, many investors quickly dump their holdings and search for the next hot fund.

The study found that the average equity investor during this period earned over 1984-2002 a return of 2.57% per annum.  During the same period inflation was 3.14% and the S&P 500 did a rock solid 12.22% per annum.  Losing to inflation over that period was a pretty poor result, and most of it was due to

The moral of the story is threefold.

a) When investing in the market – a large chunk should be in a low-cost index fund.

b) Chasing hot performing funds/managers with a good 12 month return is a statistically poor strategy and,

Further ways to improve – practice on others

When it comes to finance and economics, here are some common fallacies that are keep popping up in recent times.  Keep in mind, when everyone else get’s it wrong, it creates opportunities for you.  Challenge your (and the media’s) assumptions when it comes to investing. So trying to understand where others are wrong (or yourself) is a profitable hobby.

The facts however are against both assumptions.  Rental yields in the US are far higher (around 7-15%) and property prices are far cheaper compared to income than most markets globally due to large falls in 2007-2010.  Australia is the reverse, where rental returns are often poor (3-5%) after years of price rises and most average Australian’s struggle to afford a property.

That assumption is being tested right now.  There has never been an asset, anywhere in the history of the world, that went up consistently without significant dips.  Usually speaking the bigger the run, the bigger the dip.

Assumption: The US financial media believes that all property bubbles lead to banking crises and therefore China’s big property bubble will make the Chinese banks collapse.

This ignores the rather large differences in the financial and government systems in China when compared to the United States.  All banks are government owned in China.  Personal levels of leverage or borrowing are quite low in China, with high levels of savings and high levels of deposits for all property purchases.  There might be problems, but they appear manageable. 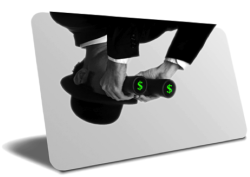 All else being equal, that assumption holds.  The problem in the US, Europe and the UK that all else isn’t equal.  When an economy is deleveraging, and loans are repaid, money is destroyed (yup – it doesn’t sound true, but it is).  Also consider the case of Japan, where printing money has been tried several times in the last 25 years but inflation has never moved at all.  In fact the Yen often strengthened.  Of course if you run the presses like crazy, then things can get away, but it is interesting that inflation hasn’t budged since quantitative easing started in 2008, already 6 years ago, despite what gold bugs have been predicting, endlessly, the whole time.  They might be right eventually, but the statistics show no sign of it being anytime soon..

What are your assumptions when it comes to investing?

Perhaps write them down, and then consider them like a scientist.  What basis in research or hard numbers can you find?  Discuss them with your partner or your adviser, since it is always easier to see the illogic in other’s arguments, rather than your own.