Donald Trump is completely correct that the Chinese authorities are manipulating the level of the Renminbi.  The only problem is that he is exactly incorrect on the direction.  China is supporting its currency to a scale rarely seen having spent $1 trillion US dollars since 2014. How much longer can this support continue?  Is a currency collapse on the cards?  What is going to happen in 2017?

Early this year we wrote that we expected the Renminbi to reach 7.2 to a US dollar.  This was more bearish than most forecasters who were expecting 6.7 by year end.  We still have a few weeks left in the year but right now it looks likely the currency currently settled comfortably at 6.9 in one of its temporary pauses the final result is likely to be in the range of 6.9 to 7 to a US dollar by year end.

What is the Chinese Government thinking?

This is always the tricky million dollar question. So let’s start with what they aren’t thinking and narrow down from there. Here is what the government probably isn’t thinking:

•   Renminbi liberalization – doors and windows to getting currency out are being slammed shut.

•   Free floating RMB – that would be a loss of control the government.

•   The economy is strong, let’s see how the economy stands by itself without infrastructure stimulus. 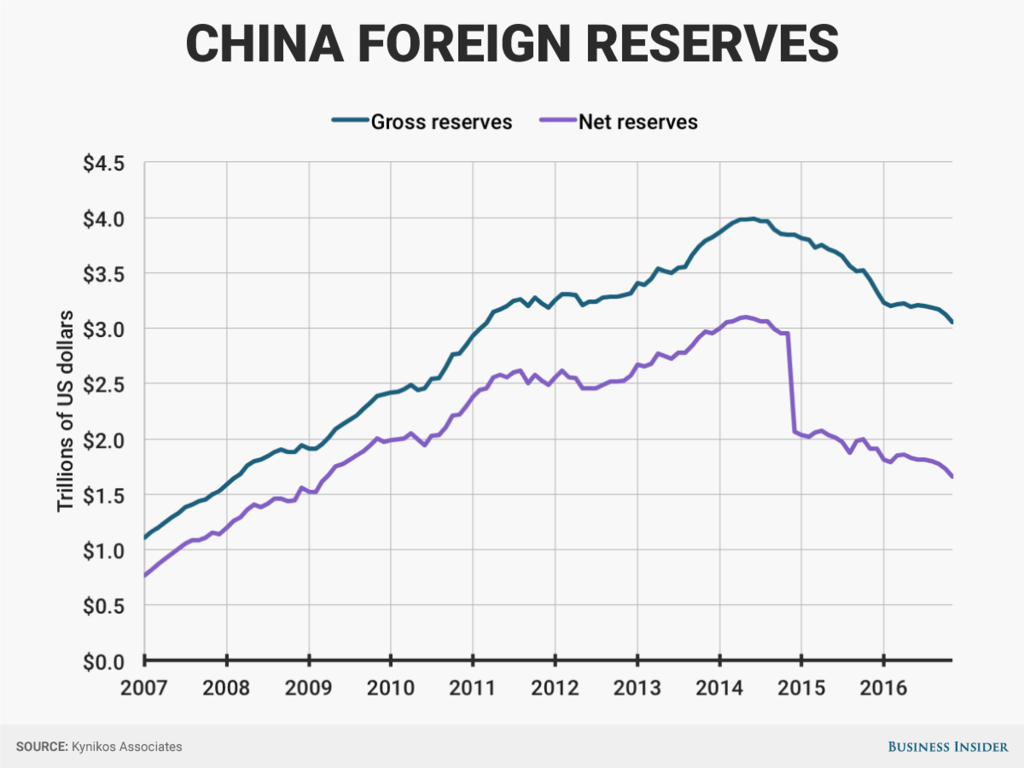 So is a collapse on the cards?

No, and let’s get this straight, the Chinese economy is doing pretty well right now with e-commerce growth rocketing and consumer confidence still pretty good.  Hotels and restaurants that we know all report a stronger environment than last year, which was pretty weak.  Growth is still probably in the 5% range and property owners probably feel pretty ebullient given their 20-30% gain in net value over the last year.

The unbalanced property market and government infrastructure investment continue to mask deeper issues.  Government nervousness in policy response betrays the confident words of their statements.  Local government, property and personal debt all continue to increase.  Factories in many labor driven sectors have already moved to Bangladesh and elsewhere years ago, and now other factories are slowly joining them as costs continue to rise quickly.  It is rare to meet a sophisticated Chinese investor who hasn’t at least considered getting a portion of their savings to a foreign currency, just in case.  The government however is ready and able to take any step necessary to prevent an untidy retreat.

An infinite number of fingers in the dyke.

Some foreign commentators believe that effectively blocking outbound currency flows is impossible to do with 100% perfection.  Perhaps, but 99% effectiveness is good enough if you are quick to find any leak and plug it.  The government merely has to prevent any sizeable channel in a timely fashion.  Unlike other emerging markets China has an efficient bureaucracy (when they want to be) that has a well practiced hand around the choke points of the banking and financial system.  The government owns all the major banking and payment players like UnionPay after all.  They have shown the motivation and ability to do this.  There are dozens of examples, but here are a few recent cases in the last week or so:

We could go on and on.

Now of course the combined weight of these rules is likely to severely curtail China’s international engagement and damage the economy in the longer term, but right now the Chinese authorities seem quite ready to wear these risks.

The problem with trying to manage a stable decline in the region of 6-8% per annum is that the predictability gives many companies and individuals the motivation to get money out.  Guaranteed gains have that effect.  Large government supported outbound investors like Hainan Airlines are paying eye-watering prices for overseas assets based on the assumption of continued currency falls.  It sure helps pay the interest bills and keep debt to equity ratios under control.  Many individuals who can find their own way around the great capital control wall of China will almost certainly use it.  Meanwhile capital controls will continue to scare away investment that might have otherwise flowed.

In 2017 the government will continue to do whatever it takes to protect the currency.  There are 3 trillion dollars to support this conclusion.  Foreign currency reserves combined with capital controls and a uniquely motivated and capable bureaucracy will likely mean further declines of 6-8% in 2017.

That shouldn’t be a reason for complacency for Chinese policy makers however.  The solutions required to safely manage the Renminbi’s decline are unnecessarily squandering China’s trillions and will almost certainly create other problems for the future.  That’s always true when a government tries to fight a market reality of this size.  So far those consequences seem manageable and will likely remain so in 2017.  The longer term consequences, however, are growing more sizeable than many would be willing to admit.  Donald Trump himself can tell you stories about what happens when you use too much debt to invest.