The RMB will keep falling

I keep talking to people who say “of course the RMB will keep going up”.  Um, no.  There is no of course about that question particularly since the RMB already reached a peak a year ago on January 14th 2014.  Still the myth persists, so it is worth revisiting why we don’t think a return of RMB strength is imminent and continued weakness, at least against the US dollar is far more likely.  Here’s why.

China’s economy is not strong.

Forget the headline numbers.  Much of this is self-reported numbers from provincial governments of dubious value.  The numbers and experience on the ground in many areas beg to differ.  Residential property prices are falling throughout the country, steel prices are at record lows and luxury brands are seeing falling sales.  The boom times seem, and feel, over.  At least for the moment.  The Shanghai government’s announcement that it was dropping its GDP growth target is a sign of the times.  It helps to understand the full context here.

A break from the past.

The present government under Xi Jinping differs noticeably from past administrations in several ways.  Yes, there is the anti-corruption, stronger centralized power, more liberal economic trends, but the key one for the economy is that the administration is trying to break the economic stimulus addiction.  The phrase the government uses is “the new normal“.  Too often the central government would address a slowing in the economy with the swift sugar hit of state bank lending.  They would encourage local and provincial governments and state owned companies to borrow and build a few more railways, subways, free-ways, dams or infrastructure and hey presto, all would be right again.

A big stimulus isn’t coming to save us.

But these sugar-hits have been dependency inducing and structural reform promoting an opening of the economy or the private industry were neglected and in some cases reversed.  China has also been left with a massive oversupply of office buildings through-out second tier cities.  We have heard stories of commercial office buildings having 50% occupancy rates in Wuxi, Changzhou, Chongqing and Tianjin, which is truly amazing.  Only Shanghai and Beijing have occupancy rates of a healthy rate above 90%.  The scale of wasteful investment and white-elephants is vast and the damage to the environment as a result, is huge.

There is still a back-stop, but no longer full throttle.

The government is determined to avoid those mistakes.  This doesn’t mean that the Chinese economy and its financial system won’t have the government’s full support.  Any of China’s top 10 major banks could expect a bailout if serious problems arose, so we have no fears like some foreign commentators that China is headed for a financial system collapse.  It isn’t.  Still, the days of 8-12% growth building yet another unneeded edifice are over. 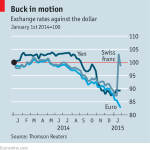 The US dollar has been unnaturally strong

If you look at the US dollar in recent times, it has been the true global star.  Some of this is due to the US having one of the healthier economies around.   Much more is due to problems in specific comparison countries and regions.  Japan and now the EU zone are doing Quantitative Easing.  The sterling is weighed down by Euro economic fears.  Brazil, Russia, Australia and the Middle East are weighed down by falling energy and commodity prices.  This is more of a short term impact, but the quick rise in the US dollar may have caught Chinese authorities off-guard with their sliding peg lagging behind.  Expect them to catch up a little if the US dollar keeps close to its recent highs.

To support the economy in more conventional ways the government and banks are letting interest rates fall.  This is reducing the demand for carry trade type investments which are a big influence on currency movements in the short term. 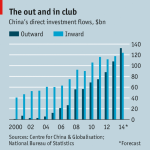 The government is encouraging companies, both private and government, to go overseas to buy assets abroad.  These flows are growing rapidly and must also be having an effect.  When you invest overseas you sell your currency to buy others and the flows are certainly large enough to have an impact on the currency.

Exports aren’t likely to grow like the old days.

It has been remarked on many places, but it bears repeating.  Chinese wages at the lower end have been growing at double digit rates for several years and China is no longer cheap.  The myth persists but it is no longer true, and in-bound investment for labor intensive industries has already moved to Vietnam or Burma.   This affects immediate demand for the currency for the investment and longer term impact since export growth is likely to slow.  A falling currency is one way the government can allow.

Inflation isn’t a threat these days.

A stronger currency was a big help in keeping the cost appreciation of rising oil and commodity prices manageable.  Now copper, iron ore and oil are all sliding and the need for a strong currency is going away alongside the inflation problems.  All the more reason for the government to let the currency do what it wants.

We wouldn’t be surprised to see the RMB get to 6.4-6.5 to a US dollar during the course of this year. So the days of investing in China at 4% and getting another 5% risk free on currency appreciation are over.  Time to look a bit more global with your personal investment allocation.