As discussed in previous articles, fees to invest can make or break an investment. As a living example of this theory, Warren Buffet bet a New York hedge fund $1 million, back in 2008, that he would beat the returns of their fund, over a tenyear period, by investing in only one low cost index fund. 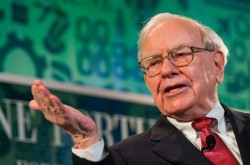 For those who are not familiar with Warren Buffett, known as the “Oracle of Omaha,” he is one the greatest investors in the 20th century and is one of the richest and most respected businessmen in the world. A $10000 investment in Berkshire Hathaway stock in 1965 would have grown to be worth nearly $30 million 40 years later.

There are less than four years left in the 10- year bet between billionaire Warren Buffett and a New York hedge fund firm, and it seems clear that Buffett will easily win.

More investment brilliance from one of the world’s richest men? Not really. Buffett’s bet was one anybody could take, purchase the Standard & Poor’s 500 Index (the index that tracks the broader US market) starting in January 2008 through a very low-cost exchange traded fund (ETF), and the hedge fund could do whatever it wanted.

As of early 2014, the hedge fund approach was up 12.5% after fees, while Buffett’s index fund was up 43.8%. A good part of the difference comes down to fees. Buffett bought an index fund that charges just 0.05% as an expense ratio, while hedge funds typically cost 2% and a massive 20% of profits.

How are they doing now? It’s hard to say, but the numbers for hedge funds aren’t pretty. Far too many of them bet heavily on specific sectors, such as energy, which have not done too well. The average hedge fund has returned just 2% last year, and we’re expecting a significant number of hedge fund closings.

If you had simply stayed in an index fund, which was Buffett’s strategy, all of that lost money would come back in due course. There was no need to find some alternative strategy, commodities, leveraged FX, distressed debt to turn things around. The S&P 500 Index fund that Buffett bought has returned 14.75% last year and has posted 15.68% annually over the past five years.

All you have to know is when you expect to retire and then hold a combination of stocks and bond index funds as per your risk profile, while rebalancing periodically.

That’s exactly why Buffett is winning. Yes, he does a lot of very creative private equity things with his investors’ money at his own firm. Yes, he does a lot of due diligence research before buying anything for his own shareholders, that’s the responsibility he carries as the manager of many billions of dollars of other people’s money. But as Buffett has said before, his own heirs should just put their money in index funds and be patient. Prudent retirement investors would be wise to do the same.